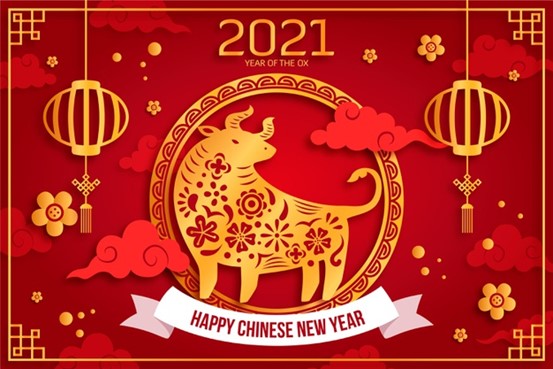 While the world’s celebrations might be more subdued this year. Chinese New Year (春节) is also known as Lunar New Year (农历新年) or Spring Festival (春节). It is known for the abundance of colour, traditional lion dances, food and live music. The public Chinese New Year holiday 2021 is February 12th through to February 26th. But the 15-day long celebrations (this year from 12-26 February 2021) are also the most significant time in the lunar calendar for Chinese people and bear special significance for the year ahead.

Origins of the Chinese New Year

The Chinese New Year’s roots are immersed in legend. One legend is that, at the beginning of each New Year, a monster named Nian (‘Year’) targeted villagers thousands of years ago. The monster was terrified of loud sounds, flashing lights, and the hue of blood, so they used such things to scare the beast away.

Celebrations, however, also involve firecrackers, fireworks, and red clothes and decorations to usher out the old year and bring forth the luck and happiness of the new one. In colourful red envelopes, young people are given money. Besides that, the Chinese New Year is a season for family members to feast and relax. Importantly, many of the season’s rituals honour ancestors who have died.

Among other Chinese New Year traditions, people usually clean their home to remove any ill-luck. Some festivities include people, cooking and enjoy special foods on certain days. During Chinese New Year the Lantern Festival is the last celebration held. During this, people hang glowing lanterns in temples or hold them during a nighttime parade.

As the dragon is a Chinese symbol of good fortune, festival celebrations are illustrated by a dragon dance. And this parade entails a long and colourful dragon being carried by various dancers through the streets.

Each New Year is named after one of the 12 animals in the Chinese zodiac: Rat, Ox, Tiger, Rabbit, Dragon, Snake, Horse, Goat, Monkey, Rooster, Dog, Pig. This is because each animal carries a special meaning. 2021 is the Year of the Ox, the second animal in the 12-year cycle.

What does the Year of the Ox symbolise for 2021

“The Chinese and Western astrologer Jupiter Lai, based in Hong Kong, says the ox is “loyal, gentle, trustworthy and grounded. The ox is a sign of strength in China, most often associated with fertility and harvests. That may be exactly what the world needs after a year of anxiety and uncertainty!

Liverpool has a huge, multicultural, vibrant community, a large percentage of which is Chinese. Liverpool Chinatown is the first Chinatown in Europe to be established. There are many Chinese restaurants in the city, Chinese takeaways, and a wide variety of Chinese food from many Chinese supermarkets. Today, Liverpool and its nearby areas are home to about 10,000 Chinese people.

Chinese people have long lived-in close-knit communities around the world, and the Chinese community of Liverpool is no different. This encourages the community to be self-sufficient while maintaining traditional values and cultural identities.

Head to Culture Liverpool for more information and follow #CNYLiverpool on social media for updates.

As well as the virtual content, there will be lanterns decorating Liverpool’s Chinatown in Nelson Street, and buildings will be lit up in red.

How to celebrate Chinese New Year at home

Take part in the virtual events

There are a number of virtual events and classes taking place online over the weekend. Arranged by a variety of different businesses and groups in Liverpool. Even more, you can listen to a Chinese Zodiac Storytelling, watch the Dance of the Golden Snake, take part in a family dance workshop, or learn calligraphy. Head to Culture Liverpool to see what’s on this Chinese New Year.

Clean and de-clutter your home

It’s important to clean your house a few days before the New Year begins. This will sweep out bad luck and make way for good luck.

Decorate your home red and gold

For good fortune red and gold paper cuttings, firecrackers, poetry scrolls, are displayed on doors and walls. If there’s a Chinese grocery store in your area, you can look for decorations.

And it is common for kids and single adults to receive red envelopes filled with money as gifts during the New Year. Don’t break the bank by stuffing envelopes with a ton of money; for kids, gold-wrapped chocolate ones would do. Just avoid giving money in fours (4, 14) or odd numbers (5, 7), which is bad luck.

You don’t have to master any complicated Chinese recipes to eat foods usually found during New Year feasts. Instead, cook simple foods that have special meaning.

Whether this is your first time celebrating the Chinese New Year or you have been celebrating it for years we hope you have a prosperous year.

From the team at Castle, may all your wishes come true 心想事成 and Happy New Year of the Ox 牛年大吉.