How did we help Kays Medical?

How did we help Kays Medical?

Kays Medical is a UK-based occupational health provider, national and international trainer, and distributor of bespoke medical services and supplies.

Kays Medical came to Castle looking for help with their marketing after having a poor experience with their previous agency. They required a fresh impetus to take an already successful organisation to a new audience.

They also needed help developing a more direct B2B funnel for their core business, and improving their sales function as they relied on sales people with black books of contacts. This left all the power in the hands of their sales people, so if they leave, they take these contacts with them and they lose a huge chunk of their business. Kays Medical tasked Castle with helping to improve their sales process, as well as increasing revenue and conversions.

Castle was also asked to refine Kays’ corporate image for consistency, allowing the sales team to perform better through the use of higher-quality sales materials. They wanted Castle to provide resource for all their design and branding work, including designing physical and online catalogues showcasing their offering, labels, brochures and other collateral.

Castle employed a range of marketing tactics to take the company to the next level. Firstly, we designed and developed a brand new website to better highlight their range of services with a particular focus on occupational health services, training and products. Castle then produced a thoughtfully designed catalogue that had stunning visual features and was easy to read. The catalogue provided detailed and informative descriptions of Kays’ products and services.

We then ran several PPC and SEO campaigns to market Kays Medical and generate leads for their occupational health services. This led to an influx of leads for their occupational health services, with Kays receiving on average 80 calls a day. We took over their existing eCommerce store ‘K2’ where they were selling their products and improved the UX, increasing sales by 11,900% in the first year.

We also worked on improving their sales process, introducing a better sales structure, CRM and post-sale process. This led to an increase in sales conversion by 300%. 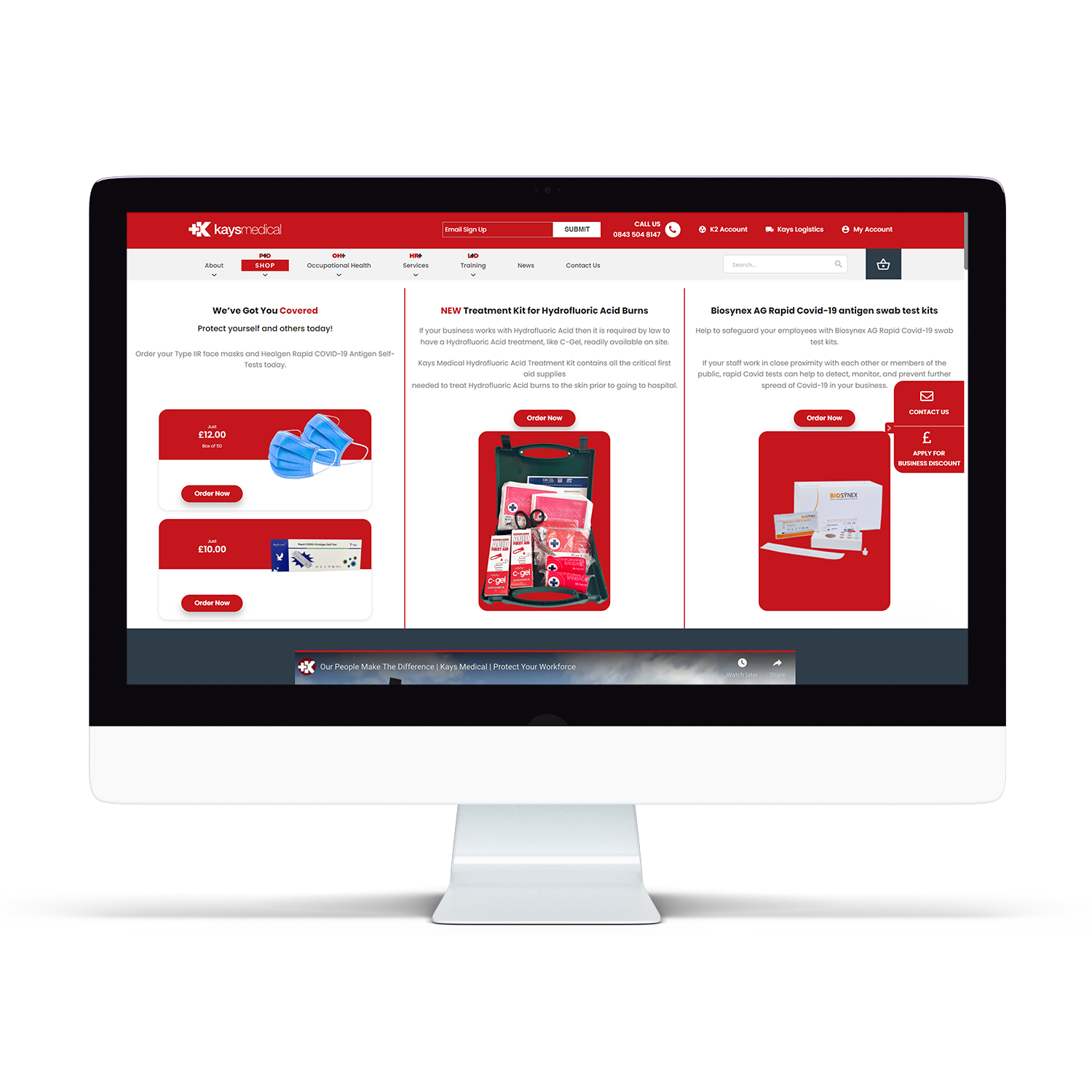 Castle began Kays Medical’s transformation through the creation of a new website. This website was to be based on WordPress rather than the previous system, which had used Magento, in order to make the site more compatible with external plugins. The design of the site itself had to place equal emphasis on the range of services Kays wanted to spotlight: Occupational Health Services, Training, and Products.

Our UX designers created an eye-catching site that was easy to navigate, highly informative, and fully optimised for user experience. Our SEO team then optimised the site to ensure it ranked highly on search engine results pages for target keywords like ‘occupational health provider’. 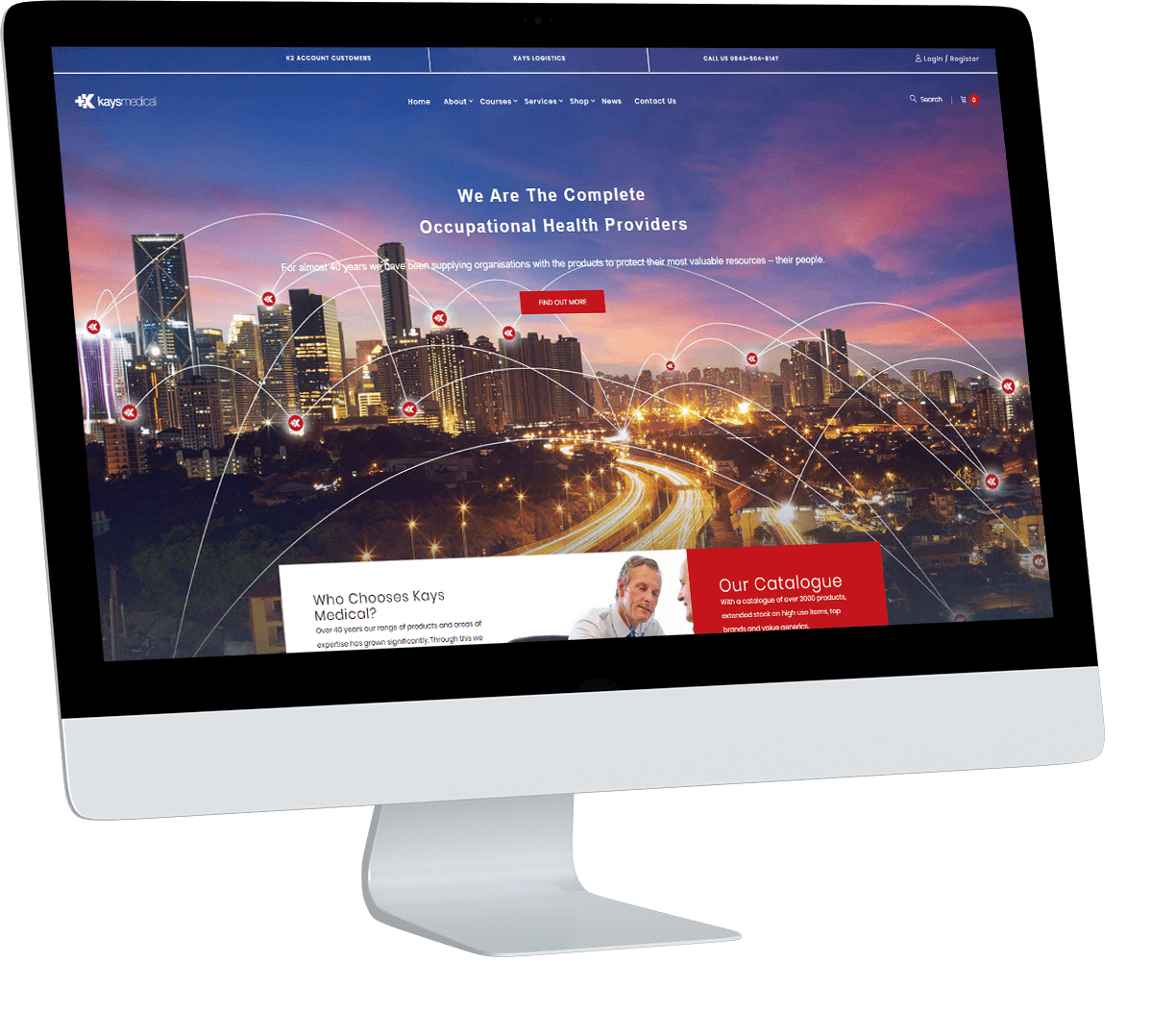 We were tasked with providing Kays with a range of marketing tactics to take the company to another level.

Castle developed an SEO strategy that created targeted lists of over 50 key search terms, both national and local, based around the three core strands of the business – training, occupational health and medical supplies – with a monthly report ranking high on Google.

Castle doubled down on this strategy through the use of organic search terms with a PPC campaign designed to quickly generate revenue for the business.

We did this initially through the implementation of a targeted email strategy based on data from 30,000 customers, which we separated into sectors, behavioural patterns, and purchase history.

We also took over management of Kays’ LinkedIn account, strategizing posts around thought leadership content with the specific aim of boosting networks and connections. This was a PR exercise intended not for lead generation but rather as a marketing tool. The goal was to garner relevant audience profiles as a way to target existing customers instead of sending direct messages to potential clients.

Finally, Castle was asked to manage an ongoing series of corporate events – namely, quarterly private dining experiences with 16-20 high profile leads and a keynote speaker accompanied by 4 points of contact from Kays Medical. 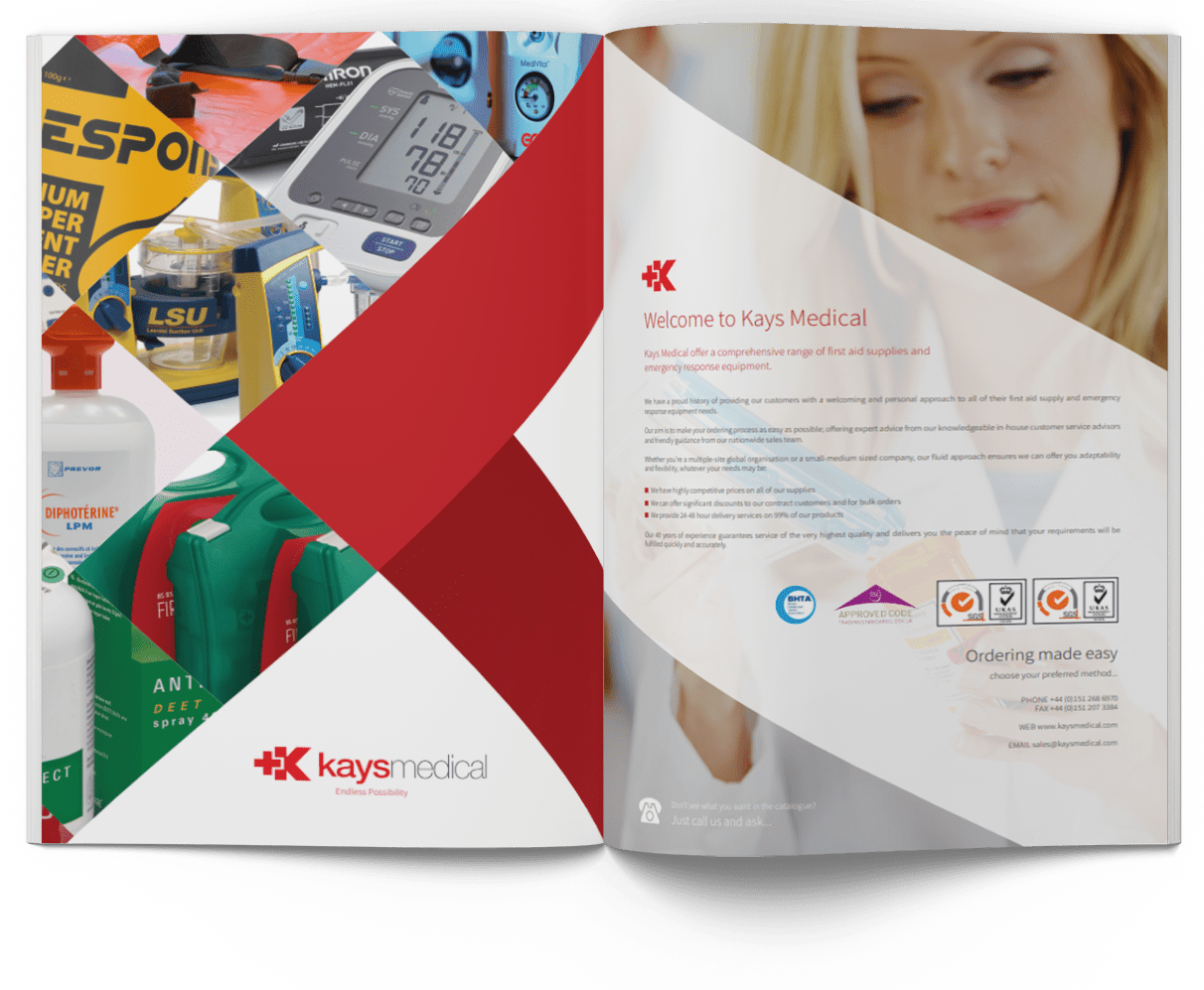 Kays Medical also had an eCommerce site, K2, where people could purchase their medical products online. Castle took over this site, redesigning it to improve user experience, recategorizing products so they were easier to find and creating optimised product descriptions for each product. Kays also needed to create connections to their existing Sage stock management system, sales order processing, batch tracking, invoicing and bar code scanning etc. across multiple sites.

Castle achieved this through the use of WordPress as a basis for the site construction, due to its flexibility, ease of use and compatibility with external plugins. This allowed them to effectively track and manage orders through their site.

Once we’d redesigned and developed their existing store, we started running targeted PPC and social ads campaigns promoting their products to those who were most likely to buy. Thanks to our improvements and ad campaigns, we managed to increase sales through their eCommerce store by 11,900% in the first year. 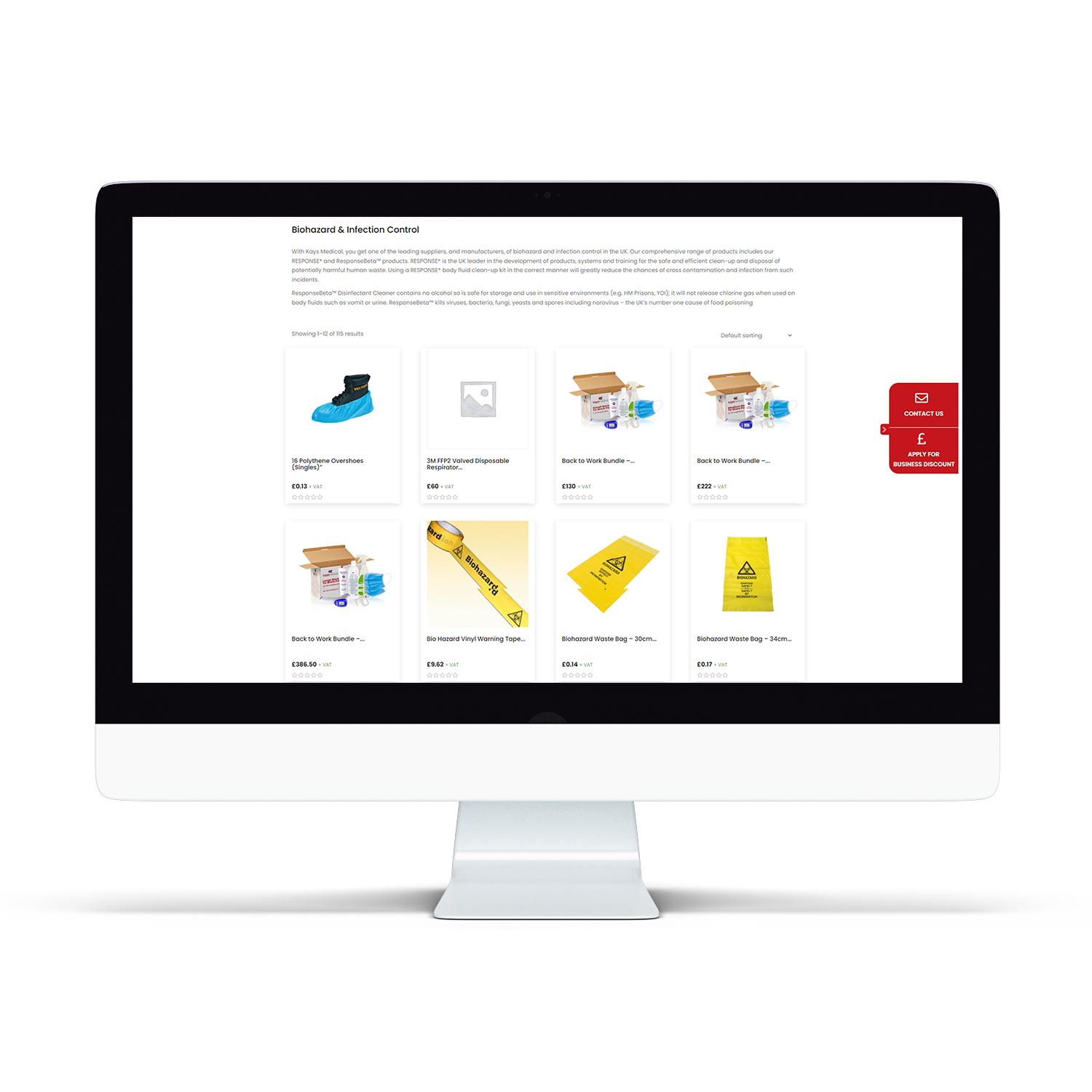 Kays Medical recognised they had existing issues with their sales process. Originally the way they worked relied heavily on hiring sales people with a book of contacts. The issue with this was that the sales people had all the power, and if they decided to leave the company, they’d take their contacts with them, meaning Kays could potentially lose out on millions of pounds worth of revenue overnight if someone decided to leave.

As a result, Kays tasked us with creating a new stream of lead generation that didn’t rely so heavily on a single individual. We implemented numerous SEO and PPC campaigns targeting those looking for occupational health, training and medical supply services that started to generate hundreds of leads a week for Kays Medical. This introduced a whole new stream of income for Kays, which did not rely on the contacts of singular individuals.

We also got involved in improving their sales function. At the time, they had no CRM system, so we implemented sales force within the company which made the process much more streamlined and efficient. We also developed and implemented a post sales structure. This helped to increase conversions as they were able to pick up calls better and be more proficient with the sales operations.

Castle’s CEO built out the sales model for Kays Medical. The new process was when someone rang up to make a small order, Kays requested all their company details, which were all inputted into the CRM. A customer support administrator would then conduct research into the company and if it turned out they were a significant sized organisation, the sales person would ring them back on an outbound call. On this call, they’d enquire about the company, mention they’d been looking into what they do and ask about their current providers, opening up more opportunity from what was originally just a small order.

We also coincided the website orders with customer sales opportunities. Once someone had made an order online, Kays’ customer service advisors would ring them up to speak to them about their order. Then when they were on the phone, they’d ask about other opportunities. Castle’s team wrote a number of different scripts for their customer service advisors to use on both inbound and outbound calls, including for example, asking killer questions and how to cross sell on the first call.

We also helped to implement sales KPIs as Kays Medical didn’t previously have any. We helped build out a tiered KPI structure with prizes and rewards to help motivate the sales team to hit their set targets and drive sales further. 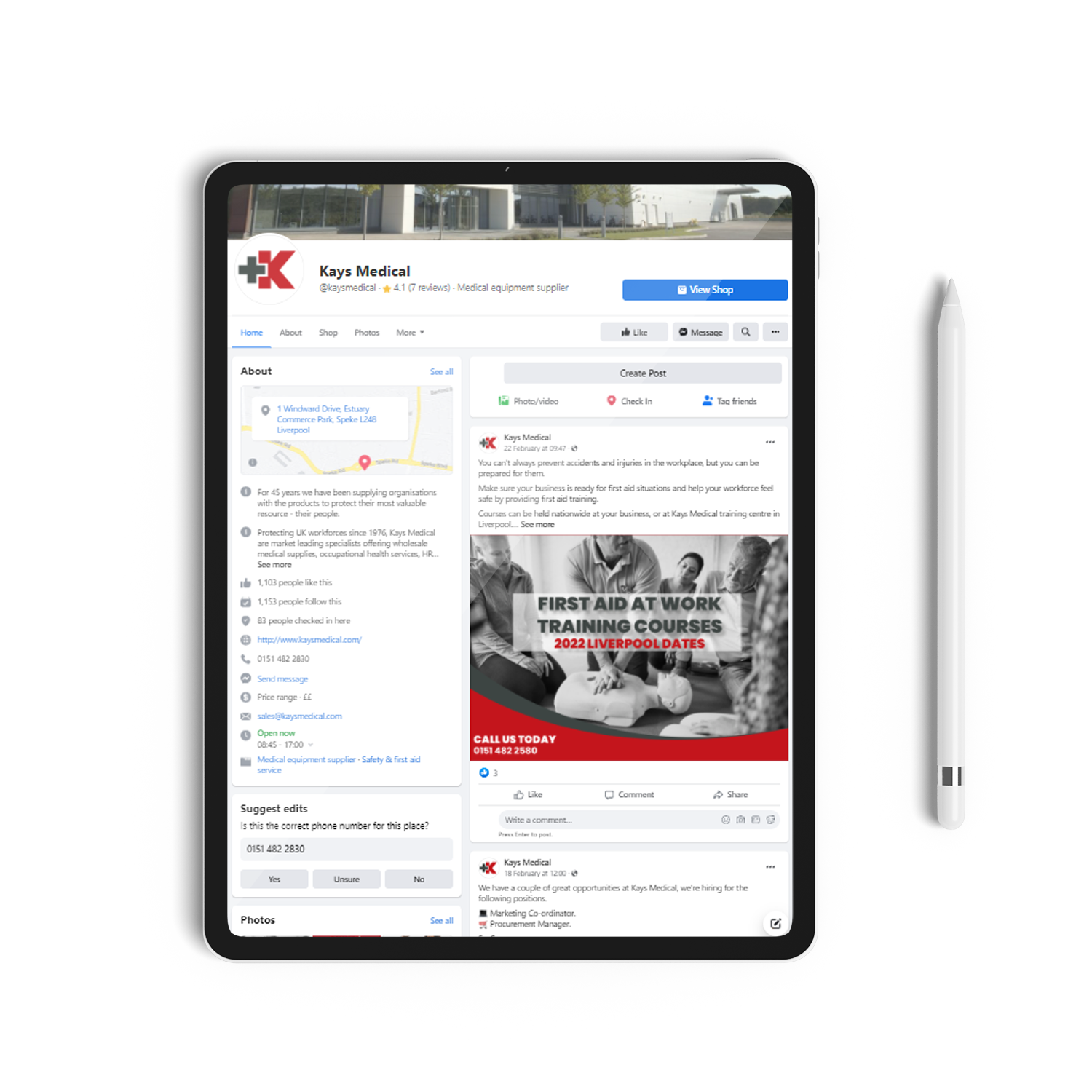 The next phase was the production of both an online and physical catalogue.

With over 3,000 products in their health range, Kays Medical required the design and production of a directory that effectively arranged the multitude of products and services they offer into relevant and organised categories, with the purpose of creating the most efficient user experience possible.

Kays had produced several catalogues in the past but had never kept any of the original EPS files (Encapsulated Postscript Vector graphics used in vector-based image creation). This meant design began from scratch and required the production of Excel spreadsheets and storyboards, as well as EPS and PDF version of each of the catalogue’s 160 pages.

Castle held a thorough consultation over the specifications of the job with the client so we could determine what style they preferred and what objectives they wanted to achieve with the catalogue. Castle then produced a thoughtfully designed catalogue that had stunning visual features and was easy to read. The catalogue provided detailed and informative descriptions of Kays’ products and services.

As a result of our UX improvements and strong SEO and PPC campaigns, alongside the newly strengthened national digital presence, Kays Medical saw a revenue increase of 50% per month. They also saw a 20% increase in traffic.

Thanks to our improvements, sales through their eCommerce store increased by 11,900% in the first year alone.

The newly implemented sales structure provided a more organised and better structure for their sales team. And the refined, consistent brand image and better-quality sales materials, catalogue and website allowed the sales team to perform better leading to a 300% increase in conversions. 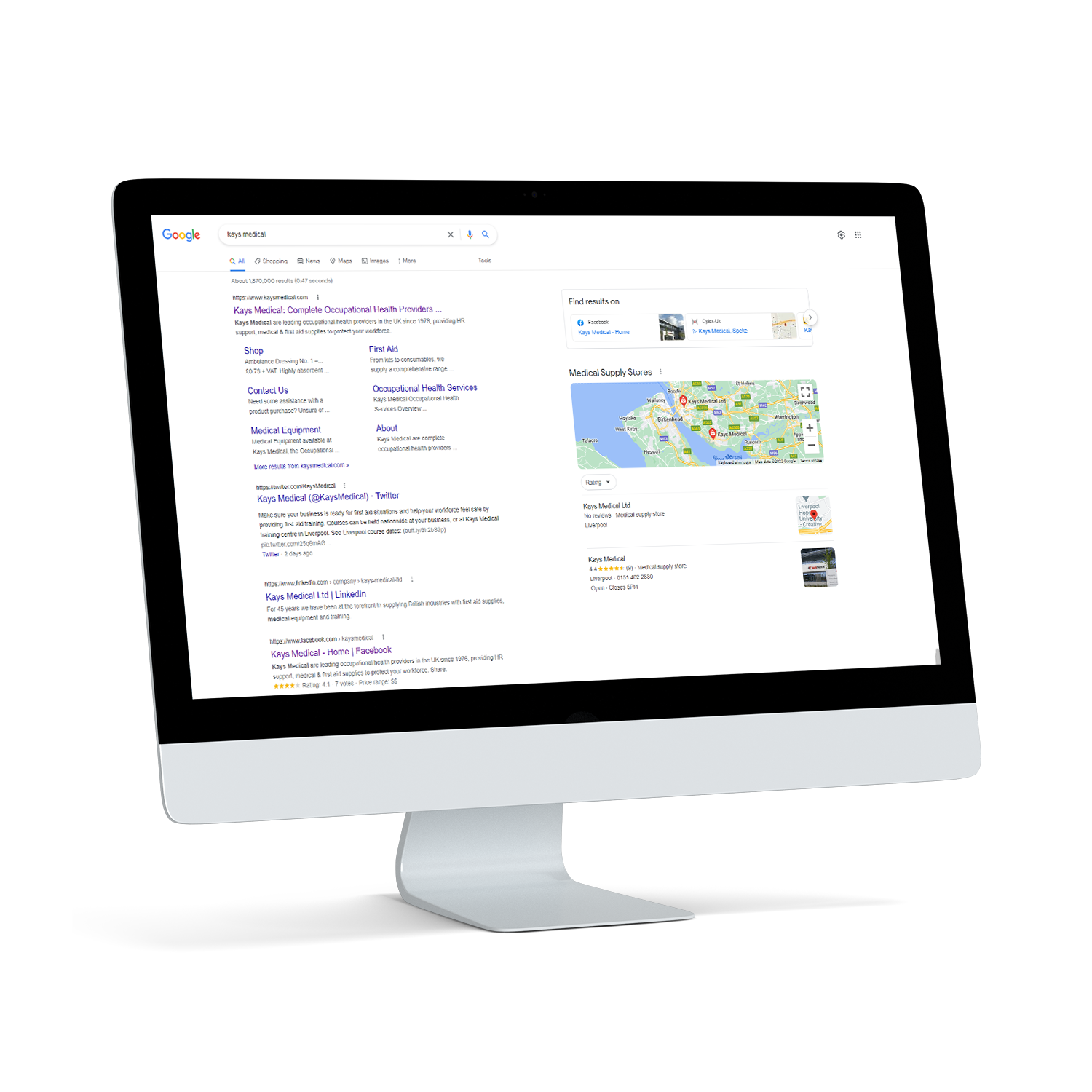 BiFold Local are a bifold door manufacturing and installation company based in Liverpool. They supply and install high-quality bifold doors to people throughout the UK.

Supreme CBD are one of the UK’s leading suppliers of high-quality CBD products. Endorsed by athletes, Supreme CBD products are third-party lab tested and CBD content verified to ensure quality and consistency. They sell a range of CBD products from traditional full-spectrum oils to capsules, CBD gummys, balms and E-liquids.

Steven Brown Art is an online eCommerce art and lifestyle brand, selling a wide range of products depicting paintings from iconic Scottish artist Steven Brown. Steven Brown’s award-winning colourful, contemporary art has made him a household name in the UK, and he is best known for his colourful McCoo highland cow paintings.