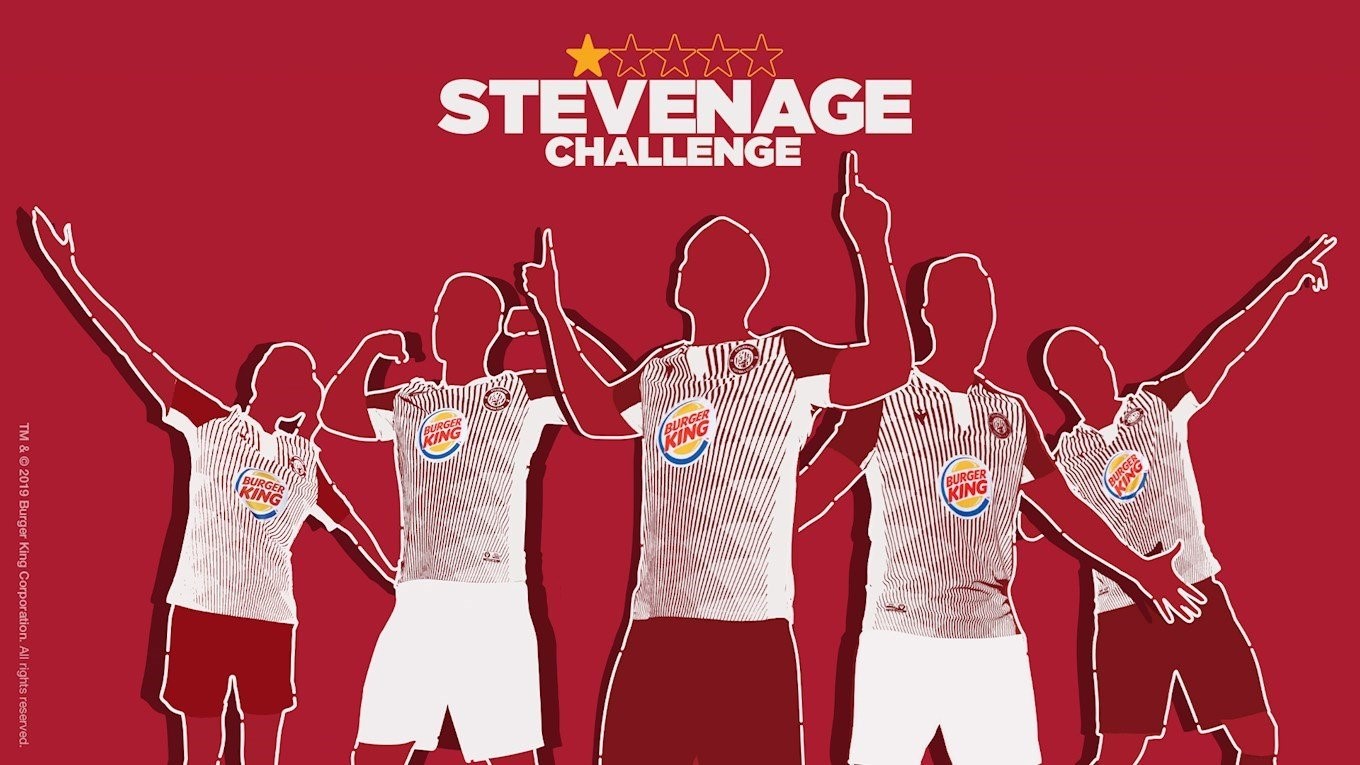 Last week, the fast-food chain Burger King was praised for its ingenious marketing campaign. ‘The Stevenage Challenge’ saw League 2 side Stevenage become FIFA 20 Career Mode’s most used team. Burger King sponsors Stevenage FC, beginning their sponsorship of the fourth-tier team at the beginning of the 2019/20 season.

Burger King launched the campaign aiming to transform the relatively unknown club into one of the biggest online clubs in the world. The global fast-food chain challenged FIFA players worldwide to select Stevenage when playing FIFA online or in Career Mode. Then they were asked to share video clips of their goals online to receive rewards and food prizes from Burger King.

The challenges varied. Ranging from simply scoring a goal to scoring direct from a corner, scoring from a free-kick, or putting one in the net from past the halfway line. All whilst wearing one of the two Burger King sponsored Stevenage FC shirts.

Once the participant had completed a challenge, they were asked to share their accomplishment on Twitter, Facebook, and Instagram to claim their prize. Career mode allowed players to bring in high-profile, non-Stevenage players to play for the team. Every player would appear in the Burger King branded jersey. This was an incredibly clever move from Burger King. It meant the company’s brand logo has been worn on the chests of huge players such as Lionel Messi, Ronaldo, Paul Pogba, Mo Salah, and Neymar. Without having to pay them the millions that it would cost in real life to get it there.

The ‘Stevenage Challenge’ was launched in October 2019 and lasted just over two weeks. In this short period, more than 25,000 goals scored by people using Stevenage. These were posted online from the release of FIFA 20. As a result of the campaign, the football club sold out their home shirt for the first time in the club’s history.

Several high-profile figures on social media praised the campaign. This included Piers Morgan who called it “world-class marketing” and Gary Lineker stating it was “Great work.”

Stevenage are building a reputation for doing things differently. They offer digital versions of their matchday programmes instead of physical copies. Last year they sold shares of the club through a sports investment company.

Getting average crowds of less than 3,000 and with other bigger clubs like Arsenal, West Ham, Tottenham, and Watford nearby, it’s difficult for them to attract new fans.

Putting together the world of gaming and sport

Stevenage chief executive Alex Turnbridge told BBC Sport: “We were quite keen to rip things up and try a new way of doing things. This gave us the chance to have a global platform. They are an edgy brand in terms of marketing, which is why we thought it’d work quite well.”

“It actually shows the digital space is now worth more than what you have in real life. We had something like 1.2 billion impressions on the campaign. It’s PR that you couldn’t buy as a League Two club unless you reach the third or fourth round of the FA Cup.

“But even then, I don’t even think a fourth-round tie at Manchester United would’ve got the engagement we’ve received. The value of being in that game is phenomenal – it’s probably a value that a lot of clubs and brands haven’t realised.”

Fernando Machado is a global chief marketing officer at Restaurant Brands International, which owns the Burger King brand. And he was behind the campaign. He told BBC Sport, “We always thought that we could do something powerful by putting together the world of gaming and real sports. Almost bridging the digital and analogical worlds with an idea.”

“We are always searching for ideas that will make the sponsorship bigger than just putting money behind a logo on a jersey.”

“What went viral this week and at the end of last year was a big success for us. But I think that there’s so much more possible to do even more than that.”

The FIFA game franchise is the bestselling sports franchise of all time. In September 2018, Electronic Arts (EA) the games developers, revealed that across all FIFA titles, the company had sold more than 260 million units since it launched in 1993. They are reported that the 2018 version saw gamers playing 7 billion football matches, scoring 17 billion goals. The competitive global series of FIFA has 20 million players across 60 countries.

This kind of platform could provide huge exposure to both Burger King and Stevenage FC. The Stevenage FC stadium plays a maximum of 52 games a season, either home or away. The Lamex Stadium, its home ground, has a capacity of 2,800 people. This is small when compared to the likes of Wembley Stadium, England’s national team’s ground, which has 90,000 seats. Stevenage lacks the investment to achieve promotion to the Premier League and is years away from being in the same league as the bigger football clubs in the country.

The thinking behind the Stevenage CHallenge

In a recent video, Burger King explained the thinking behind the campaign. They said they realised that even though Stevenage FC was at the bottom of England’s 4th division, they were going to appear in the same video game all the expensive players were going to be in. This is why the fast-food giant decided to sponsor Stevenage. Because if their logo was on their real physical shirts, it would definitely appear in the game.

Considering the limited brand exposure at physical games, the digital FIFA 20 platform could put Burger King at the front of a huge audience all day, every day. Due to their relatively small size and fanbase, it may have seemed like an unusual choice for Burger King to sponsor Stevenage FC. But when you consider Chevrolet paid Manchester United FC £64 million for their shirt sponsorship, it was a clever and cost-effective way for Burger King to tap into this market. And achieve the same digital exposure as brands sponsoring the bigger clubs for much less money. Burger King reportedly paid just £50,000 to sponsor Stevenage.

To ensure their brand got the exposure they wanted, they started the Stevenage Challenge campaign. Offering incentives such as free food to get more people to choose to play Stevenage. The challenge took the gaming community by storm. People immediately started choosing Stevenage and signing the best players to the team and playing with them. Just like that, the small team in real life turned into the biggest online team. And it brought about huge exposure for both Stevenage and Burger King.

New ways of tapping into your target market

Burger King cleverly tapped into gamers desires to be challenged and rewarded. They used social media marketing to capitalise on their sponsorship. This marketing campaign was incredibly inventive and allowed Burger King to promote their brand to millions worldwide. For a fraction of the price, other brands were paying for the same exposure.

Burger King has proven that there are other ways of reaching your target market that many companies have not yet tapped into. They have highlighted the huge possibilities that come with clever social media marketing campaigns. This genius piece of marketing has seen the fast-food giant receive many prestigious awards. While Stevenage FC is to this day still one of the most popular teams on FIFA.